Three friends go on a road trip but one of them is dead!

How did Three for the Road come about?

Jonathan Hirons originally wrote it as a film script but the pandemic got in the way. He showed it to a few people and someone suggested it would make an ideal radio play. Eventually, it became a podcast in 3 episodes. As movement about the country was restricted, he enlisted Rob Edwards, who he has known for many years, to join the cast and they set about recording it remotely. The rest, as they say, is history.

It is a story about loss – the friends you had and the times you had it your youth – but wrapped up in humour, intrigue and some laugh out loud moments.

Three for the Road has just been launched and all three episodes are now online on the Three for the Road website (threefortheroad.buffalolounge.co.uk) and can also be found on Apple Podcasts, Google Podcasts and Spotify. There is also a RSS feed – https://feeds.buzzsprout.com/1824982.rss

For enquiries and further information:

Who’s involved in Three for the Road?

Jonathan is film-maker, writer and producer. He wrote Three for the Road.

He has just won an award from the Tavistock Trust to write and produce a documentary about  Aphasia.

He is also behind the long-running blog – Vernon Grope:Diary of a Rock Star

Rob has worked across all the media: theatre, TV, film and radio, and played everything from Ray Cooney farce to Shakespeare, from a scientist being strangled by a robot in Dr Who, to Hamlet , to being the original Scar in the West End production of the Lion King for which he received an Olivier nomination. He won a coveted Royal Television Society award for best actor in the BBC’s drama “Men who sleep in cars”.

As a long-established actor, Virginia has extensive experience on stage, television, film and radio. Stints in Coronation Street, East Enders, The Bill and comedy sketch shows, as well as serious dramas have accompanied her critically acclaimed work in the theatre.

Performing in the West End, regional theatre and with the National and the RSC, she has also played lead roles in major productions abroad, including My Fair Lady and The Cherry Orchard.

Zubin has worked across theatre, film and TV, with roles in Deep State, Strike Back, Our Girl.
He has worked in the West End, for the National and the RSC. 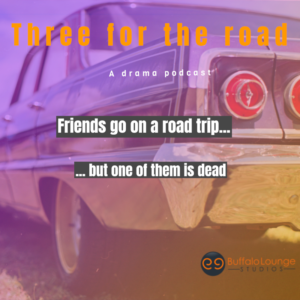 Three for the Road – a comedy drama

Copyright © 2022 Three for the Road. All Rights Reserved. Theme by ILoveWP.com